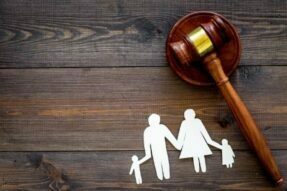 Guardian means a person who is taking care of a minor person or of his property or both of minor and his property. The Guardian and Wards Act was passed in 1890 and given the power to the district court of appointing a guardian of minor child belonging to any community. Afterwards, the Hindu law of guardianship of minor children has been codified and reformed by the Hindu minority and guardianship act, 1956 whose object is the interest and welfare of the child because they are incapable of taking care of himself or of handling his affairs, So that’s why they require  help, support and protection by any senior person. Under this type of situations a guardian has to be appointed for the care of his body and his property. This act wants that the child should be taken care of physically as well as morally. According to section 3 of this act it applies to a person who is Hindu, Jain, Buddhist or Sikhs by religion and according to Section 4(a) of this act Minor means a person who has not completed the age of 18 years and who is immature and not physically and intellectually perfect so that’s why need someone’s protection. Types of guardian includes Natural guardian, Testamentary guardian, guardian appointed by the courts despite this there are other two types of guardians under hindu law (1) Self-appointed guardian (2) Guardians by affinity.

Under this section any person will not be entitled to act as the natural guardian of a minor if he is not a hindu or he has finally left this world by becoming a hermit (vanaprastha) or an ascetic (yati or sanyasi). In this section the meaning of the word “Father” and “Mother”  do not include a step father and a step mother.

Section 7 of this act says that the natural guardianship of an adopted son who is a minor at the time of adoption passes to the adoptive father and after him to the adoptive mother[1].

Guardian Appointed by The Court

The courts have power to appoint guardians under the Guardians and Wards Act, 1890. The High Courts also have inherent jurisdiction to appoint guardians but this power is exercised scarcely. The Hindu Minority and Guardianship Act is supplementary to Guardians and Wards Act. The jurisdiction is conferred on the District Court under the Guardians and Wards Act, 1890. The District Court may appoint any person as the guardian whenever it finds that it is compulsory for the benefit of the child. While appointing guardian, court shall take into consideration various factors like age of child, sex, wish of parent’s, and personal law of child. But main motive is the welfare of the children. The District Court has the power to appoint or declare a guardian in respect of the person as well as for separate property of the minor or for both. This power extends to the undivided interest of a coparcener. The guardian appointed by the court is known as a certificated guardian.

A de facto guardian means self – appointed guardian. He is a person who takes continuous interest in the welfare of minor’s person or in management or administration of minor’s property without any authority of law. Alienation made by de facto guardian is void. According to Section 1, De Facto guardian is not allowed to dispose or deal with the property of the minor and it is given that the guardian does not have the rights to take any debt.

Guardianship by affinity is the guardian of a minor widow. In the earlier days of the Smritis child marriages were very common. After the marriage happened of a minor girl with the husband, then the husband became the guardian of the girl. If  in any situation, the husband died then the minor widow should not feel unsafe. Because when a minor girl becomes a widow then the husband’s relatives have the responsibility to protect and maintain her but if in husband’s family no one is there, then the father of the widow takes the responsibilities of the widow to protect her.

The present appeal was filed in the Supreme Court of India against the judgment and order passed by the Additional District & Sessions Judge, Fast Track, 1st Court, Barasat on July 15, 2006 and confirmed by the Calcutta High Court on December 7, 2007. By the impugned orders, both the Courts had directed handing over the custody of the minor child Antariksh Kundu to father Abhijit Kundu, who is respondent herein.

In the instant case, on overall considerations we were certain that the Courts were not right or justified in granting custody of minor child Antariksh to Abhijit- respondent herein without applying relevant and well-settled principle of welfare of the child as supreme consideration. The trial Court should have ascertained the wishes of Antariksh as to with whom he wanted to stay.

We had called Antariksh in our chamber. To us, he appeared to be quite intelligent. When we had asked him whether he wanted to go to his father and to stay with him, he clearly refused to go with him or to stay with him. He had also stated that he was very happy with his maternal grand-parents and would like to continue to stay with them. So Supreme Court were, therefore, of the considered view that it would not be proper according to the facts and the circumstances to give custody of Antariksh to his father who is respondent herein.

For the above stated reasons, the appeal was deserve to be allowed and was accordingly allowed. The application filed by the respondent Abhijit for custody of his son Antariksh was ordered to be dismissed. In view of the facts and circumstances of the case, however, there had been no order as to costs.

In the present case the minor is a gild. She can have no community of interest in property with her father. The question of joint family status cannot come in. I hold that it is the inherent right of a father to have the custody of his minor children and that right is transmissible by will or testament, and there is nothing in the Hindu Law to prevent such transmission. There being no specific rule against the appointment of a testamentary guardian by a father for his minor children either in Hindu Law or in any valid custom, I hold that a father has power to appoint by will a guardian for the person of his minor children whether there be joint family property or not and that right does not depend upon the father being able to devise by will any property to his children for whom he appoints a guardian.

In this case, the Hindu Law tried to find a solution out of two difficult situations: firstly, when a Hindu Child has no legal guardian there would be no one who would handle and manage his estate, in law and thus without a guardian, the child would not receive the profits which could arise from his estate and Secondly, a person having no title could not be permitted to interfere with the child’s estate so as to cause loss to him.

A de facto guardian of minor’s property has powers to bind minor’s estate by a simple contract or debtor to borrow money on the security of Negotiable instrument, provided that the contract, debt or loan is for legal necessity or benefit of the minor’s estate and provided further that the guardian has not excluded his liability under the contract, debt or negotiable instrument.

Adoption of a child by any guardian is creating a relationship of the child and the guardian, it creates the subject matter of personal law and for a minor, it is mandatory to protect his property and for that reason, there is a guardian who will take care of him and his property. Special thanks to the lawmakers who invented these types of laws for protecting the minor and his property and for the unmarried girl and widow. In this way, no one can steal or misused for its own benefit the property of anyone who is a minor. Therefore, the guardian is very necessary for a minor for the welfare of him and to protect him physically or mentally and secure from any danger.