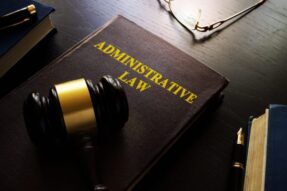 What Is Rule of Law?

The term “Rule of Law” is derived from the French expression ‘La Principe de Legalite’ (the principle of legitimacy) referring to a government based on the rule of law and justice in contrast to the dictatorship.

The concept of Rule of law is old-fashioned and ancient. Ancient Greek philosophers, such as Plato and Aristotle, lived about 350 BC.

Plato wrote: “Where the law is subject to some other authority and has none of its own, the collapse of the state, in my view, is not far off; but if law is the master of the government and the government is its slave, then the situation is full of promise and men enjoy all the blessings that the gods shower on a state.

Similarly, Aristotle further underwrites the concept of the Rule of Law that “law should govern and that in power should be servants of the laws.”

As per Prof. A.V.Dicey, “the rule of law means the absolute supremacy or predominance of the regular law as opposed to the influence of arbitrary power and excludes the existence of arbitrariness or even of wide discretionary authority on the part of the government.”

According to theory of DICEY, rule of law contains three (3) main principles.

The First meaning of the Rule of Law is that ‘no man is punishable or can lawfully be made to suffer in body or goods except for a distinct breach of law established in the ordinary legal manner before the ordinary courts of the land’.

This has always been a basic understanding of the law that goes hand in hand with the fact that the law rules over all people including the people in charge of the law. Lawmakers need to give reasons that are not allowed under the law while exercising their power to make and administer the law.

As the words suggest, no one is above law. All are equal in the eyes of law. It means there should be no distinction between rich and poor, official and non- official, majority and minority. Everyone should be treated equally. No one can be degraded no one can be upgraded.

There should be an enforcement authority and Dicey believed this authority could be obtained in the courts. The courts are the enforcers of the rule of law and must be impartial and free from all external influences. Freedom of the judiciary therefore becomes an important pillar of the rule of law.

It is generally thought that a written constitution is the source of civil liberties. However, this is not true as Britain has an unwritten Constitution. The spirit of law is the real source of law in England. The spirit of the law is reflected in its customs, meetings, and judicial decisions. Dicey argues that the rights and freedoms of individuals are safer in Britain than in France.

Basic aspects of the Rule of Law according to A.V. Dicey

Merits and demerits of concept of Dicey

Modern concept of rule of law

The rule of law is a powerful concept. It cannot be taken to mean that it is a fixed legal system from which it does not move. The concept of Legal Law discussed by the International Commission of Jurists met in 1959 in New Delhi. The main results are:

Applicability of Rule of law in India

The doctrine of the rule of law was unknown in ancient and medieval India. The king was the source of the justice and the protector of all laws. He was considered lawless.

During the British rule, the principle of the Rule of Law was ignored even though this law was followed in Britain. The East India Company has been interested in expanding its trade, revenue and expansion of its territory. It gave little importance to law enforcement and fair justice.

Role of Judiciary in Rule of Law

There are a number of cases where the concept of the rule of law was discussed. Some of many cases are as follows:

The case is also known as Habeas Corpus. It is one of the most important case when it comes to the rule of law. The question raised before the considered court is whether there is any legal law in India other than Article 21 of the Constitution of India. It was in the context of the declaration of emergency that the enforcement of articles 14, 21 and 22 was suspended.

In this regard, the Supreme Court has ruled that the rule of law is one of the most important aspects of the doctrine of the constitution.

In this regard, the Supreme Court considered our Constitutional system, the most important and most notable is the concept of the rule of law which means, in the current context, the authority of the courts of law to examine all administrative actions at a legal level. An administrative or administrative action that does not meet the standard will be set aside if the victim brings the matter to the notice.

In the above discussion, it can be concluded that the essence of the law is the goal; the rule of law is the best tool to achieve goals. Some of the efforts are also taken up by the court where the Rule of Law is linked to Human Rights. The strategy was developed by a court in which the government could be forced not only to legislate but also to create conditions in which the power could be developed by the people to enjoy their rights in a fair and understandable way. In Indian society, the law did not achieve the intended results. A few examples where the law was upheld by our court and ensured that justice could be clearly seen in creating new mechanisms that seek solutions to human rights violations by applying for PIL.