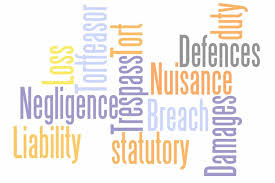 In layman terms, the act of negligence can be defined as the act of failing to perform requisite duty with due care and caution.

An offence is the result of an act that had been induced and carried out by and due to various factors involve. Factors that add up to label any act as ‘negligence’ are:

1. The defendant had a duty of care towards the plaintiff

2. The defendant breached the duty he/she owed to the plaintiff

3. The plaintiff must have suffered injury/damage due to the rash act of the defendant.

A classic case of negligence is Donoghue v. Stevenson[1], the famous ginger beer case. In this case, the plaintiff had suffered stomach ache due to the contaminated beer he had drank. The beer had remains of a snails in it which weren’t apparent to the plaintiff or seller as the beer in question was contained in an opaque can. The court in this case laid down the guiding principle of ascertaining the responsibility of the act.

Using this settled precedent to show how an act fulfils the ingredients of negligence.

DUTY OF CARE TOWARDS PLAINTIFF:

To ascertain the liability of the defendant, the plaintiff has the onus of proving that there existed a duty of care towards himself/herself that ought to have been followed by the defendants.

In the above stated suit, the court ruled that that it is the manufacture who will liable for his negligence in taking due care of the contents of the beer he made thereby derelicting his duties towards his customers.

BREACHED THAT DUTY OF CARE:

To show that the occurrence of negligence , the plaintiff has to prove that the defendant not only had a duty of care towards him but also that the same was breached through the rash act of the defendant i.e either his commission led to negligence or the omission to do the right thing resulted in negligence.

In the aforementioned suit, the court stated that it is the manufacture who has the duty to supervise the whole process and check if the quality is fit for the consumers. The presence of the snail is the representation of the fact that the defendant derelict his duty.

DAMAGE SUFFERED DUE TO THE BREACH OF DUTY OF CARE:

The damage referred here must be an implication of the negligent act. They must be foreseeable by the defendant so as to prove negligence as the defendant can only be liable for his rashness when the damage is directly/indirectly attributed and anticipated from his act. The test of viewing such an aspect with a view of a reasonable man is imperative in such cases so as to know the extent of foreseeability,

In the above stated example, the health condition of the plaintiff was a direct and foreseeable ramification of the defendant (manufacture’s) negligent act. Had the quality of the beer been as it was supposed to be, the situation wouldn’t have arisen in such a case. Since all the ingredients were met, the defendant was made liable for his negligent/rash act.

Negligence as Defined and Penalised by The Criminal Law in India:

The criminal laws in India view negligence as a grave offence which is punishable under the Indian Penal Code, 1860. Section 304A of the IPC refers to the act that results in death of an individual due to an extremely rash/negligent act but it cannot be equated as culpable homicide/murder due to the lack of requisite intention to take away someone’s life.

The section was not originally presented in IPC in 1860 , it was added through an amendment in the year 1870. Its main aim to address the lacuna in act resulting in death and no evident mens rea to prove liability under section 299 (culpable homicide) and section 300 (murder). The section is exempted from the purview of acts that can be qualified as accident under section 80 as the rashness of the act is not a mere representation of the carelessness but also shows that the intention can be found in the knowledge of the adverse implication if the act is done without any care and caution.

The medical field has been an evidence to various unfortunate incidences of negligence causing death, thus the acts so related fall under the ambit of ‘medical negligence. In such suits, the onus to prove fault lies on the plaintiff. He /she has to prove that the medical professional has failed to perform his duties and has aberrated from the normal course of the practice prevalent.

The court has laid down various precedents to iterate in terms of determining negligence in medical cases.

In this case, a homeopathic doctor had administered medicines of allopathy. Thus, the court held that whenever there is an act which is an impression from the normal course of practice and is in violation of statutes that governs such practices the medical professional can be charged with negligence. The act will be classified as negligence also because of the fact that it is not anticipated from such professionals.

In this case, the appeal was filed by the doctor who had been alleged of medical negligence that had resulted in death of the respondent’s brother. The deceased had died on the account of delayed supply of oxygen cylinders and lack of immediate treatment that was to be provided in such a case. The court held that a professional who makes the promise of possessing the required skills for a particular job, if he fails to do what he is supposed to do and thereby breaks the fiduciary relationship between him and his client then the professional can be charged with negligence. This negligence arises out of the cause that he had negligently conducted his activities or conducted his activities in a manner which was not in accordance with the common practice.

For more notes on Law of torts, Click Here.