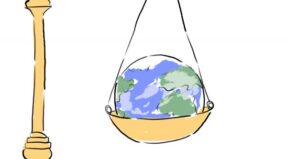 Extradition is the handing over of an alleged offender (or convicted criminal who has escaped before completing his prison term) by one state to another. The term extradition denotes the process whereby one state surrenders to another state at the request a person accused or convicted of a criminal offence committed against the laws of the requesting state, such requesting state being competent to try the alleged offender.

The Extradition is based on the Latin term “aut punier aut dedere” (either punish or surrender).The law of Extradition mainly based on multilateral or bilateral treaties and municipal laws consolidated by particular countries.

Generally each state has full jurisdiction over all its subjects with in its territory, but sometimes a state becomes helpless to punish a guilty person. It is so because such guilty person after committing crimes fled away to another country. So if there is handing over the criminals to the alleged state the end of justice with its real spirit cannot be attained. Due to this fact the nation states adopt the doctrine of extradition. In other words, the nation states hand over the criminals to the affected states in the administration of justice.

Definition of Extradition in International Law

According to Oppenheim, Extradition is the delivery of an accused or convicted individual to the state on whose territory the alleged criminal happens to be or the time being.

In Black’s Law Dictionary, extradition has been defined as “The surrender by one state or Country to another of an individual accused or convicted of an offense outside its own territory and within the territorial jurisdiction of the other, which, being competent to try and punish him, demands the surrender.

If an alleged offender is in a territory other than the states seeking to exercise jurisdiction the lawful method of securing his return to stand trial is to request his extradition. Extradition as a rule is effected by bipartite treaty. There is no duty to extradite in the absence of a treaty. Request for the extradition of fugitive criminals are made through diplomatic channels in the concerned foreign state. Upon receiving such a request the foreign government institutes judicial investigation to determine whether there is sufficient evidence in accordance with the local laws to warrant the arrest of the fugitive. If there is a prima facie case of guilt the fugitive is to be surrendered when the fugitive is returned he must be tried for the offences mentioned in the request for his extradition and for no other crime.

Treaties signed in recent decades tend to take a “dual criminality” approach, classifying as extraditable all crimes that are punishable in both jurisdictions. Older extradition treaties, by contrast, tend to list covered offenses. For instance, the treaty between Albania and the United States, signed in 1933, includes an inventory of more than two dozen crimes, including murder, rape, arson, and burglary. Many extradition treaties only allow extradition for crimes that carry a punishment of more than one year.

Treaties also define instances when extradition is to be denied. For instance, authorities generally cannot extradite individuals for military or political offenses, with exceptions for terrorism and other violent acts. Some states will not extradite to jurisdictions with capital punishment or life imprisonment under any circumstances, or unless the requesting authority pledges not to impose those penalties.

Other common provisions deal with nationality (many states will not extradite their own citizens, or will only do so on a limited basis), double jeopardy, statutes of limitations, administrative expenses, legal representation, and transfer of evidence.

Generally following conditions or rules are inserted in the extradition treaty:

This is one of the most controversial issue reacting to extradition and also one of its exception. A fugitive criminal shall not be surrendered if the offence is of a political nature and if it is termed as a “political offence”. This trend was started during French Revolution and then followed by other countries.

In castioni’s case[1], castioni a Swiss subject had in 1890 taken part in political disturbances in Switzerland in the course of which he killed a municipal commissioner. In the extradition treaty, the British court had ordered the release of castioni on the ground that the offence was political as castioni had fired the shot with the intention of and in furtherance of the object of getting rid of the government.

Military, religious and trifling offences are not generally subject to extradition proceedings.

The Rule of Speciality

The fugitive demanded shall not be liable to be tried for any offence other than that mentioned in the request for his extradition.

In U.S.A vs. Rauscher[2] , Rauscher a Sailor was surrendered by Great Britain to the U.S.A to stand for murder, but he was tried for inflicting cruel injuries. The Supreme Court of the U.S.A on appeal quashed the conviction as he was tried for an offence other than the one mentioned in the request for extradition.

The crime must be an offence in both the requesting as well as the surrendering state. This is based on the principle of Double Criminality.

In the Eisher extradition case[3] , Gerhert Eisher, an alien communist convicted in America of some offences and fled to England. He was arrested by the British Police and tried before a Magistrate. The British Magistrate discharged him as the offence of Perjury for which he was convicted in America did not fall technically under the offences of Perjury in England. This case emphasises the principle of Double Criminality in Extradition law.

In Singh’s case[4] Nepal government satisfied that there was a Prima Facie Evidence of the guilt of the fugitive Criminal before he was surrendered to India.

Extradition may be refused in cases where there is a possibility for the extradited individual to receive a punishment out of proportion or severe in form when compared to the degree of offense. This principle is specifically invoked in order to avoid violation of Human right norm accepted globally

Where there is a possibility of the death of the fugitive in the requesting state, such request is denied as per this principle to protect and avoid violation of Human rights norms internationally

An extradition treaty was signed between India and U.K on 22 September 1992 and ratified on 15 November 1993. The extradition treaty requires certain preconditions, Firstly Dual Criminality- which means that offence under which a person is being extradited should be a crime in both the countries. Secondly, the punishment for the crime in the requesting state should be more than one year. Thirdly, the punishment should not be death penalty (in that case the requesting state can give the commitment that the death penalty will not Be imposed). Fourthly, the charge sheet in the court should have been filed in the requesting state and the court should have issued an arrest warrant.

Recently in news the extradition cases of Indian business tycoons, it’s been 5 years since Vijay Mallaya fled India. His extradition from the united kingdom is still awaited despite the fact that India has won all the court battles in U.K in 2020, still his extradition seems to be unending.

Similarly, in the case of extradition of diamond merchant Nirav Modi, U.K approves his extradition but his appeal against extradition awaits in U.K High Court for decision.

Other fugitive in PNB fraud case, Mehul Choksi arrested by Dominica Police in Dominica. But in his case Mehul Choksi is an Antiguan citizen, Even if the Dominican court agrees to it, Mehul Choksi can be extradited only to his home country which is Antigua and Barbuda, not India.

Position of the State in International Law

It must be noted that the state has no duty to extradite an individual. But, there can be a treaty between that states that they will extradite any criminals that run away to their country and vice versa. They can also voluntarily extradite a person without any treaty. States should keep in mind that during extradition, they should not violate their own municipal laws i.e. the laws of their own countries and international conventions.